In our first part of this interview series, we discussed why concrete abrasion is such an issue for concrete construction and how it’s often treated. (For all the details, give it a read!) Most of the solutions discussed were shown to be complicated and ineffective. But we ended on a positive note, briefly talking about a solution that could offer a more worry-free way to increase concrete abrasion resistance.

That solution turned out to be Hard-Cem. As the only integral concrete hardener on the market, it offers a unique advantage to construction workers. With Hard-Cem, workers only have to add it to the concrete mix during batching, and that’s it. Hard-Cem doesn’t need a complicated application process and has been shown to be effective at what it does. And what it does is double your concrete’s wear life while increasing your concrete’s resistance to abrasion and erosion.

But is all that too good to be true? How does Hard-Cem actually perform? To look into it, we asked our previous contributors, Technical Director Jeff Bowman and Kryton Western Canada Territory Manager John Andersen, to give us the details. 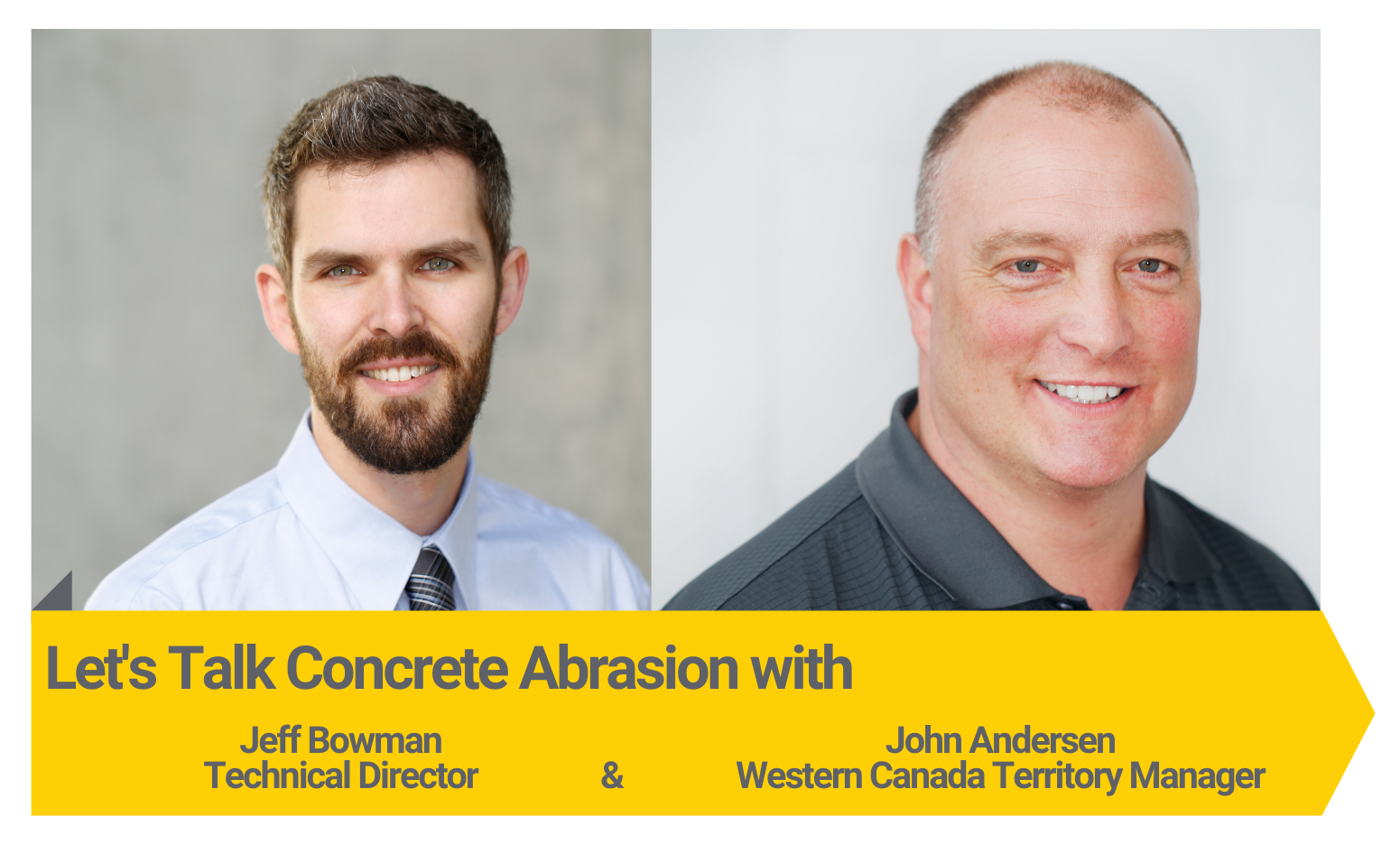 So, why don’t we start by talking about the performance you can expect to see when you use Hard-Cem for increased concrete abrasion resistance?

Jeff: To answer that, let’s first review some of the test methods you could use for abrasion resistance.

There are several established test methods published by ASTM. But the one I’d like to highlight today is ASTM C627 (also known as the Robinson floor test based on the machine that is used for the testing).

Now, what’s really interesting about this test is that it applies a much higher load and a much longer test duration than many of the other methods that people might use. 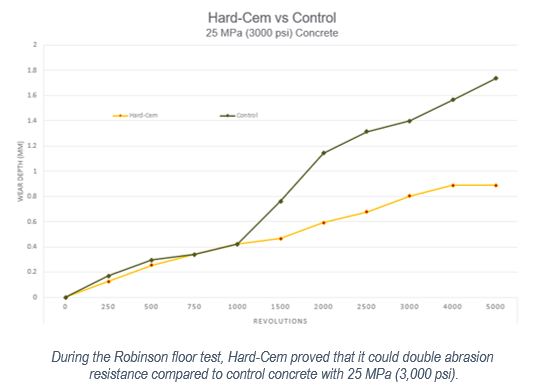 And early in the days of Hard-Cem’s development, Dr. Rusty Morgan, working with AMEC, recommended using this test and adapting it to increase the load and the test time to make it more useful as a test for the abrasion resistance of concrete. One of the advantages of this adaption is that because the test panel is quite large, it allows you to get a more realistic look at real-world finishing conditions that you might use for your concrete.

Essentially, during the test, wheels rotate around the concrete, allowing you to measure the depth of wear directly just by using a pair of depth calipers.

A common result for this is a very straightforward, plain concrete mix of 25 MPa [3,000 psi] with about 1.8 mm of wear depth. And after 5,000 revolutions, the depth of wear of the Hard-Cem concrete is reduced by about half compared to your plain concrete. So it creates a very significant increase in the abrasion resistance of that slab.

How does Hard-Cem perform against competing products like dry shakes?

Jeff: There are a range of dry shake materials, products, and aggregates.

Some of them do perform really well.

But if you look at our Robinson floor test results comparing Hard-Cem with different dry shakes, Hard-Cem came in with the lowest wear depth at just under 1 mm, whereas other dry shakes that were tested next to it had around 1 mm to 3 mm of wear depth.

So, you’re getting excellent abrasion resistance and you’re getting the additional advantage of a simple and reliable installation. And you’re not making any compromises on the performance of that concrete. 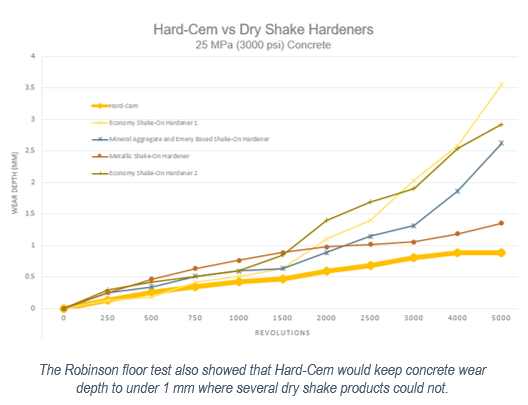 re there any case studies about Hard-Cem’s performance?

John: Certainly! I can share a couple right now.

The facility team later invited us in to have a look at the facility’s concrete to see how it performed. And there was a clear visual divide. In one area, it was nice and shiny with nice, straight edges on the concrete. This was the Hard-Cem concrete, and it was right next to the regular concrete, which had broken edges and was worn out and dusty.

It’s a good example of what you can see when you put Hard-Cem in your concrete. 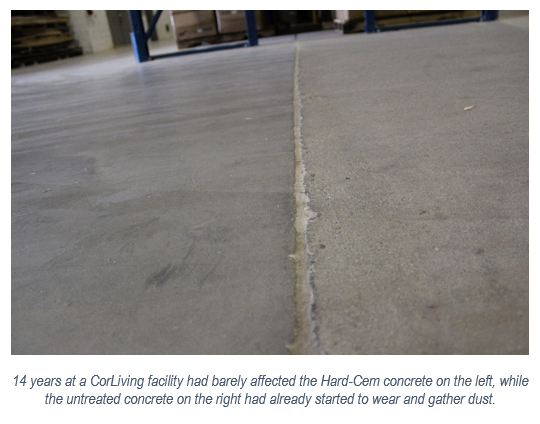 Another good example is this second case study for a concrete company. They placed Hard-Cem concrete in the exit area for their concrete batch plant trucks as a way to demonstrate the performance of Hard-Cem to their customers. 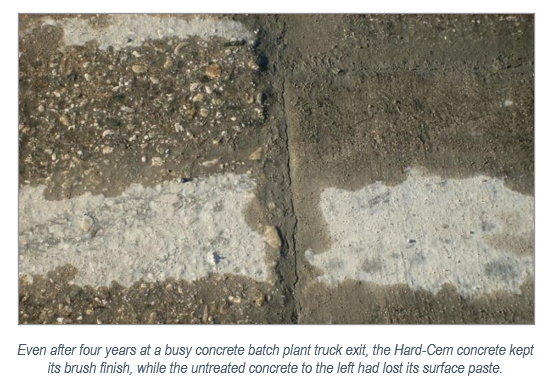 After four years, they came back and took a look, and you could see the control concrete with the heavy machinery, loaders, and concrete trucks driving over it. It was really ground down and its concrete paste had worn away, whereas with the Hard-Cem concrete, you could still clearly see the original broom finish marks in it and its paste was completely intact.

We’ve proven that Hard-Cem can be highly effective with no application hassle. But does it have any other benefits worth talking about? We’ll look more into that on the third and final part of this interview series.

The post Concrete Abrasion Resistance: The Bad, the Good, and the Better (Interview Part 2) appeared first on Kryton.

There are a few different types of concrete contractors, but all have one thing in…

You may be interested in trying stamped concrete for your driveway, but you need to…

There are many ways to make Money with eCommerce. Some of these ways include selling…

What is stamped concrete? Quite simply, it is a type of decorative concrete. It is…